skip to main | skip to sidebar

Book signing, readers and an invite out of the blue

Firstly, I’d like to thank those who came to my book signing yesterday at Waterstone’s in Hanley. Thanks me ducks.

Although I write because I obviously enjoy it (why else shut yourself in solitary confinement and conjure monsters and killers), there's a difference between writing for pleasure and selling work to be published. When you write for pleasure, you're writing for yourself, but when you write for publication, readers are the most important thing. If they don’t like what you write, then they won’t read anything else by you and that’s the end of the line where publishing is concerned. So I hope people, on the whole, continue to like what I write, and that they stick with me on what I hope will be an entertaining journey. Everyone who buys my work is taking a chance and spending their hard earned money, and I respect and appreciate that more than you will ever know. Each and every one of you is the greatest.

Now for anyone who would like to see where I write, I have a guest post up at Book Chick City. It would be great if you could stop by and leave a comment (it’s a great site to visit anyway as there are lots of things to read and some great book reviews): http://www.bookchickcity.com/2010/10/all-hallows-eve-where-stories-are-made_30.html

On the writing front, I was invited to submit to an invitation only press, so I’m keeping my fingers crossed that they like what I (sent) send, but it has inspired a new novel idea that I’ve made a start on. So far I’ve not kept to a theme with my novels (one’s about a strange village, one’s a serial killer story, then there’s zombies and mutated creatures), and this one is unrelated to anything else too. I don’t know whether people like themes, but I like variety. I think that if I kept to one subject, such as zombies or suchlike then it could grow a little stale and as an author, I’d only be catering to a niche group. And of course, writing about different subjects also means that if a reader doesn’t like one book, then they might like another, and like I said at the beginning, when you write for publication, readers are the most important thing.

And last but not least, Happy Halloween. Hope everyone has a great night and stays safe.
Posted by Shaun at 8:54 am 2 comments:

Okay, my American odyssey is now over, but here's a brief summary of my time there. 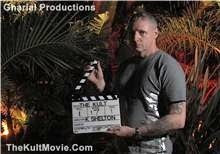 I started out by getting up at 3 a.m. My colleague from work, Nick who was accompanying me, picked me up and drove us to Manchester airport. From there it was a brisk flight to London. As I'd only had an hours sleep, I was not operating well, and the check-in to fly to New York when we arrived at Heathrow customs was a bit of a nightmare as I couldn’t understand the man asking me questions. He had a way of looking at you as though you were mentally deficient. But by hook or by crook, he eventually let me through. 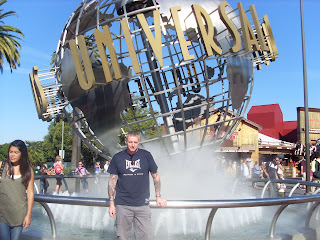 The flight to New York was around 7 hours, in which I tried unsuccessfully to sleep. During that time I watched The Karate Kid, and was left wondering why oh why remake a film like Karate Kid, and then when you do remake it, why oh why have them doing kung fu? Not a patch on the original.

Passing through New York customs we were subjected to a large, bossy woman shouting out orders like an army drill instructor for everyone to remove their shoes, jackets and sweat tops. I expected her to start shouting for us to 'drop and give me five'.

We eventually arrived in San Diego and checked into a hotel near the airport for some much needed sleep. The Mexican man behind the reception desk commented that I reminded him of a famous British actor. I was thinking someone suave and sophisticated, someone like Daniel Craig in James Bond. He said the actor played a cop and I eventually worked out he was referring to Simon Pegg. Little did he know I was the real Shaun of the Dead. 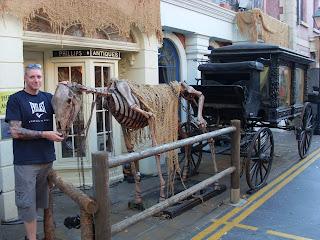 At breakfast, Nick struggled to get to grips with the waffle making machine, finally getting the hang of it after creating numerous sheets of inedible cardboard.

Now the greatest problem we faced so far was the language barrier. No one could understand us. Nick tried speaking slowly and enunciating each word, but they just looked at him like he was retarded. He also tried using his limited knowledge of Spanish, 'Buenos dias', but when they replied, he was obviously stumped.

We then picked up our rental car, a black Ford Mustang convertible (Nick would eventually fall in love with the car. Once we arrived at Vegas I expected him to visit a drive though chapel to marry it - and could envision the vicar's face after he asked where the bride was, and Nick replying, 'I'm sitting in her'.)

Everywhere in San Diego seemed so clean compared to the UK, and our first of many visits to a Denny's was an introduction to the stereotypical US burger bar I have seen on film, complete with effervescent waitress who was only too happy to make us feel at home.

Next we drove to Temecula where we were staying to see some of the shoot. We checked into to the hotel at 3:00 p.m. At 3:40 p.m. the editor in chief of Leucrota Press, Danielle kindly picked us up to take me to a book signing that had been arranged at Barnes & Noble in Oceanside. There was a great turnout, including some people that I had communicated over the internet with, such as Allan and Guido, and I was overwhelmed that the principal cast from The Kult turned up to say hi (Joe, Karenssa, Windy, Justin, Steven, Curtis, J.G., Tim, Harry). As I said to them, it was very surreal to see the characters I’d created brought to life and standing around me, made flesh. 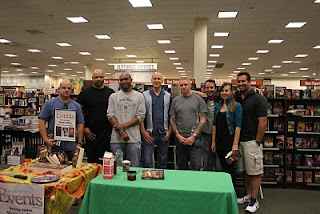 I must also say thanks to Karenssa's friend, Vivien who having heard me lament about the lack of a decent cup of tea in the US on Twitter, turned up with a thermos flask of the good stuff.

Straight after the signing I was whisked away to the set to see some of a night shoot. This is where I first met the director Kip and the producer, Dan. Both great people, who between them have enrolled an awesome bunch of people both behind and in front of the camera. People like key grip, Ivan Duran and assistant director, Tino Luciano who also has his own stunt company: http://reeltimestunts.com/ (btw, his truck is amazing. It's as large as a monster truck, has a silver skull grill and a pair of dangling balls at the rear that undoubtedly brings a chuckle to many a driver that follows in the behemoths wake - I got a lift across to one of the sets in it. By the time I climbed up to the cab I needed oxygen). At the shoot I got to use the clapper board, and then got to perform a cameo with a great lady called, Sandy. When she went into character, she had to be seen to be believed, and when she started swearing at me, I had to keep telling myself, 'she doesn’t mean it, it's only a film'. But she was that convincing, I have my doubts …

The next day Nick and I visited Sea World. The sun was out (I'm sure weather men out there have a pretty boring job: 'And today it's going to be sunny. And the forecast for the coming week is, you guessed it, sunshine. And guess what, the week after, more sunshine'. They probably pray for rain. And snow, now that would give them an orgasm). 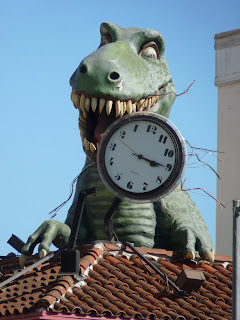 The dolphin show was outstanding. And the catchword in the US seems to be 'believe', and I can see why. This is a country of dreams. And the people never stop believing. Their optimism is contagious. Believe me.

The next day I was back on set. It's amazing seeing it all come together, and Kip has so much knowledge about film making that it was a pleasure just listening to him talk. Hearing the characters speaking words I'd written was another one of those strange things that sent a shiver down my back (it also became apparent that many of the actors and people involved came together through unusual circumstances, almost as though it was meant to be - there's a certain serendipity about the whole film).

I also met Kevin Newman who is making all the bodies for the film. Another great guy who is passionate about his work. I saw some of the moulds for the bodies and they are fantastic (I was also given a severed finger from one of the scenes, presented to me in a display case. A really great, gruesome memento - I was just glad they didn't stop me at customs on the way home as I might have had some explaining to do).

During the day I had a nice, long chat with Windy, met the effervescent Natalie, the confident J.G. (and a couple of people whose names I can't remember. Apologies, but it was great meeting you) and even though he wasn't shooting, lead actor, Joe turned up too. Although it was a full days shooting, it seemed to fly by all too fast, and the charming Brianna, who has interviewed most of the principal cast, even took time out to interview me too.

After a couple of days in LA (visiting Universal Studios, Hollywood Boulevard, Beverly Hills, Venice Beach etc.), we drove back to Temecula and Nick and I went out for a meal with Kip and Joe. Listening to both of them talk really inspired me. Their energy and enthusiasm is overwhelming. In fact, all the cast seemed to have bonded very fast, and they all seemed to support one another, which was great and obviously makes working together that much easier. It will also help make their friendship on screen all that much more real to believe. 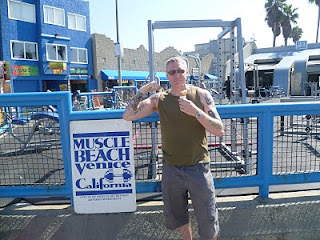 Finally I'd like to give my thanks to everyone I met, all of whom made me feel so welcome. I couldn’t have wished for a greater bunch to be associated with the film, and I know they're all going to do an awesome job. And I really do believe that.
Posted by Shaun at 7:21 am 13 comments: